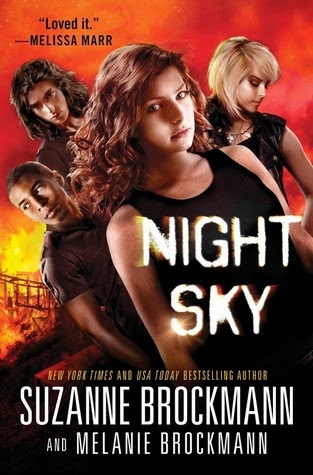 Skylar Reid is shaken when Sasha, the little girl she babysits, is kidnapped. Scared that the weird dreams she’s been having about Sasha are real—and even more afraid that Sasha is already dead. When a mysterious girl with extreme butt-kicking abilities roars into town on a motorcycle and, well, stalks Skylar things get even weirder. Supergirl Dana tells Sky that she also has abilities – that a hormone in their blood makes them stronger, faster, smarter. A hormone that the makers of a new drug called Destiny will murder to get their hands on.

Dana and Milo, her dangerously hot yet oh-so-forbidden partner in crime, want Sky to join them in their mission – to mold Sky into the ultimate weapon. She can sense there’s something about her abilities they’re not telling her. But the only way to save Sasha and stop other girls from being taken is to embrace the weird…and fight Destiny.
Night Sky is the first collaboration between Suzanne Brockmann and her daughter Melanie.  I did have to wonder who wrote most of the book because it didn't have the same feel as a regular romantic suspense by the elder Brockmann.  Having said that, I thought it was a fairly good YA read. Skylar has lived in the area for a year and still feels like a fish out of water. After a strange run in with a crazy person at a store one night, she meets Dana.  Dana explains that she is a greater than; someone with special abilities.   She joins Dana and Milo in the hunt for the missing Sasha.

I liked the main character, Skylar.  She was a misfit, but pretty comfortable in her own skin which is always a plus.  I also enjoyed her relationship with her friend Calvin.  I liked how the friendships with Dana and Milo developed.  The light romance between Milo and Skylar was really cute.

My only complaint about the book is I felt there was a lack of world building. I know that this story takes place within the same "world" as Suzanne Brockmann's book, Born to Darkness (my review). Had I not read that book, I might not have had any idea about what was going on with the references to the economy and the changes in the government.  Born to Darkness is definitely not a YA book, so any teen reader who might pick this up, could be confused as to what is going on in this new world.

There is a novella, Dangerous Destiny, that takes place about a year before the events of this book.  It gives us a glimpse into how Skylar and Calvin met.  It's a fairly quick read and worth picking up along with Night Sky.

Thanks for stopping by today. We appreciate your comments :)